CapRover has built-in support for several popular apps that can be deployed as is. These include WordPress, MySQL, MongoDB and many more.

There is a repository of One Click Apps on GitHub and it's continuously growing.

Thanks to @8byr0, we have a community maintained directory of apps. You can view the source code here.

What about other apps? 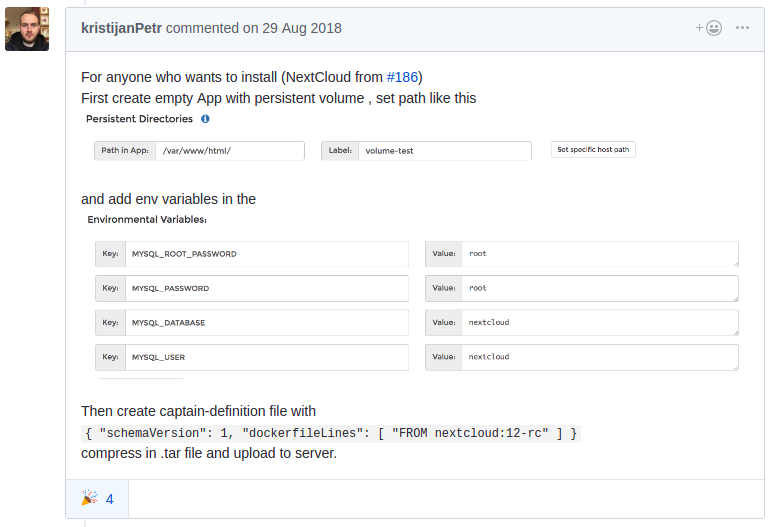 With CapRover v1, it's even easier than the method explained above. Since captain-definition now supports imageName. You can copy and past this into the deploy section of an app that you create. No more tar file creation is needed when all you need is imageName:

All the environment variables that you can set are listed on their DockerHub page: https://hub.docker.com/_/nextcloud/

They all come with pre-configured settings, however, you'll be have the option to customize the settings. For example, MySQL database uses port 3306, but you can change this port to another port if it suits your needs.

So you deployed your one click app and sometime later a new version comes out and you want to update your app. The process is different for different apps:

Most good quality apps allow you to simply update the underlying image and that's it! This usually the case for most application. For example, if you have a MySQL 5.5 and you want to upgrade to 5.7, you can simply go to the "Deployment" tab, navigate to the bottom and under Method 6: Deploy via ImageName just type in mysql:5.7 and click deploy!

Note that there are other use cases where CapRover modifies the original image to provide more functionality. For example, redis container is modified to provide authentication option. In this case, it's easier to simply delete your app and recreate it. If your app has persistent data, make sure NOT TO REMOVE the volume when deleting the app and make sure to recreate the app with the exact same name so that the exact same volume will be attached to the app.

Some apps have a different way of upgrading, specifically if they have persistent code data. WordPress is a good example. To upgrade WordPress, all you need to do is to perform upgrade from within the wordpress website panel itself. Sometimes on top of that, you need to upgrade the underlying image, in that case, just follow the guide above.

Note that since all these applications are Docker containers, you can have multiple MySQL databases on running on port 3306 without having any conflict. If you want to connect to two different MySQL databases, from a PHP app, where both PHP and MySQLs are under the same instance of CapRover, you can use srv-captain--mysqlappname1:3306 and srv-captain--mysqlappname2:3306.

However, if you want to connect to your database from a remote machine (e.g. your laptop) you need to map a container port to a server port. In that case, you have to map two different ports on the server, for example:

Port mapping is needed if you want to connect to a database from a remote machine. You can read more about it Captain Configuration - Port Mapping.

After port mapping, you can enter these values for your Database Client:

IMPORTANT: After port mapping is done make sure to open the server port. For example, if you mapped port 4444 of your host (server) to port 3306 of your container, you need to run the following command: